This was posted 7 years 2 months 20 days ago, and might be an out-dated deal. 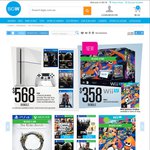 Extra 10% Off These deals If you head in store Next Wknd. Cheers to victorwilson