This was posted 6 years 3 months 19 days ago, and might be an out-dated deal. 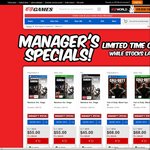 Both PS4 and XB1 versions of these games are $55, online and in-store at EB. Not sure when the promo finishes.