This was posted 6 years 5 months 16 days ago, and might be an out-dated deal. 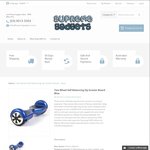 Smart Electric Self Balance Scooter 2 Wheels Board aka Hoverboard

Scooterboards/ hoverboards/ self balance boards were making waves in the technology sector starting with celebrities and numerous articles being written about them. Then all of a sudden cheap knock off's flooded the market with new Self Balance Scooter businesses springing up out of nowhere, selling these knock off's which caused the issues such as the boards catching on fire. Now there's more compliance around these boards a lot of the overnight businesses that sprung up have now disappeared. The reason why the knock off's were catching on fire was because the battery chargers were not compliant and the battery inside the scooter was a cheap version of a Li-On Battery.