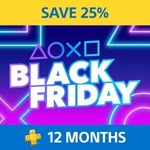 Edit - price is $44.96 if you purchase through your PlayStation.

Further to the games in this deal, it appears that the 12 months PS Plus subscription will also be on sale through the Playstation store -

And Black Friday also brings discounts on PlayStation Plus membership! Get a 25% discount on the price of a 12-month PS Plus membership , which is available for a limited time**, so make haste!

But that’s not all, Black Friday also brings discounts on PlayStation Plus! For a limited time only, save 25% on a 12-month PS Plus membership.

According to the HUKD post, the PS Plus deal should start about midnight 23/11/2019.

PlayStation Plus
by Sony Interactive Entertainment