This was posted 2 years 5 months 7 days ago, and might be an out-dated deal. 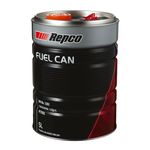 Great value if you can source some cans.

Good to throw in the back for long road trips.

Don't smoke near an open filled can or you may get bang for your buck.