This was posted 1 year 4 months 29 days ago, and might be an out-dated deal. 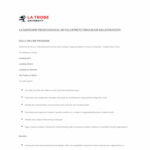 La Trobe Uni is offering a free leadership course made up of 4 units of approx 4-6 hours each to be completed in your own time. It's not a qualification but might have useful info for those who have the time to do it.