This was posted 11 months 3 days ago, and might be an out-dated deal. 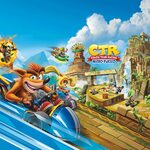 First time post but thought this would help those stuck at home pass the time during the holidays. Digital download of Crash Team Racing until 9 Jan 2021. Enjoy!