This was posted 1 year 5 months 27 days ago, and might be an out-dated deal. 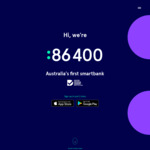 That's it! You'll receive your bonus in your Pay account within a couple of days.

Double bonus offer: Customers who join between 1 January 2021 and 31 January 2021 using the code NEWYEAR20 and make a purchase within 30 days of opening an account will receive a payment of $20 into their Pay account.

There are always a few people who will try to game the system, so here are some fair play conditions.

We retain the absolute right to refuse to pay or cancel a “First Purchase Bonus” payment without notice to you. The reasons for us to refuse or cancel a payment may include, but are not limited to, if:

We also retain the absolute right to stop the offer at any time and to change the conditions or incentive of the offer.