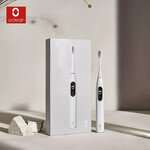 Why spend $300 on Oral B or Philips when you get more and better value with Oclean?

The latest and greatest toothbrush from Oclean. The previous model was highly rated by fellow Ozbargainers. The new model has further improved with key differences:

Similar to the previous model:

Please note the product is in stock and ready to ship, starting April 1st (as I confirmed with the rep).

The listing has a few errors.. please disregard the July 4 or April 7 shipping time.

Title price includes GST and shipping, and is based on current Mastercard rate.