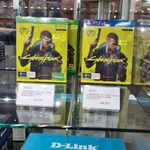 Cheaper than last time for Xbox One and PS4. Saw this one at Marsden Park, NSW.

PS: I took a photo but posting on mobile and Ozbargin won't let me upload the photo