This was posted 10 months 1 day ago, and might be an out-dated deal. 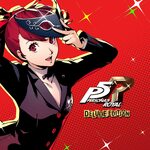 I'm currently ~70 hours into the base Persona 5 that came with the PlayStation 5 collection and am loving it. Have been considering buying Royal to jump into after I finish P5, had a look at the PS store and saw this.

Thought this looked like a good price for P5 Royal Deluxe digital edition. This is only a dollar or two more than the P5 Royal regular edition sales which have been posted on Ozbargain. Looks like the main difference for the deluxe edition is a few extra cosmetic items.