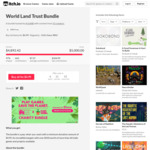 As well as including a number of itch.io-only titles, this bundle also includes direct downloadable (DRM-free) versions of a large number of indie games that are highly rated on Steam, e.g.

"Play Games. Save The Planet" Charity Bundle from World Land Trust and Plant Based Gaming (from 03.12 to 10.12)

The bundle is a pay-what-you-want with a minimum donation amount of $4.99. An incredible bargain with over $450 worth of more than 60 indie games and projects available.

Update: $10,000 in less than 24 hours! 🥳
From myself and everyone involved in this bundle, THANK YOU SO MUCH. Over $10k raised is incredible and we're blown away by your generosity. We've increased the target to $20,000, can you help us get there? Share this tweet!

It’s no secret that the world is in immediate danger from climate change. You can’t switch on the TV, browse the internet or listen to the radio without being reminded how bad the situation is right now. Rising sea levels, global warming, forest fires, entire species' extinction. But there is still time to do something.

We’ve reached out to our friends and the wider video game industry to come together and raise money for the World Land Trust, an international conservation trust working with a network of local partners around the world to save, protect and restore critically threatened habitats for wildlife, and in doing so, lock up carbon and address climate change.

Organised by Plant Based Gaming with the help and support of Future Friends Games. MASSIVE thanks to ALL participating developers. We love you. <3

Would you retweet this to spread the word?

Please note: No Steam (or other external) keys will be given for bundle purchases. Only direct downloads will be available on the itch.io page.