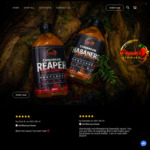 The promo code is for sauces only.

Cannot thank you guys enough for the record breaking day we had last time we did this sale here.
We ran out of stock in a few hours and a lot of you missed out, hopefully you get some this time. Be quick!!!
Also thank you to all the people who reached out to tell us how much they loved the sauces, it really means a lot to us.

We really love our Ozbargain family.