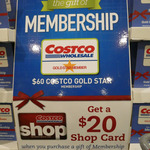 Costco are doing a repeat of this deal as a Mother's Day promotion. The promotion is in-store only and ends on Sunday 8th May. You have to be a current member to purchase.

Confirmed from the previous deal these have no expiry and can be used to renew your own membership.

This is part of Mother's Day deals for 2022.
Other Gift Card Instagrampost Membership Mother's Day