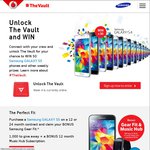 Vodafone and Samsung are giving away 50 GALAXY S5 phones to a lucky person/persons. The prize is for 50 phones, to 1 winner. There are 5 weekly combinations to solve, and the winner of each receives two tickets to the grand final in Sydney. The final will involve a day of solving puzzles and challenges to solve one final combination and open the vault containing 50 phones.

Entrants form a crew (minimum 1, max 50 people) on the Vodafone Vault website (www.vodafonevault.com.au) and use a series of clues to decipher a 5 digit alphanumeric combination. 2 clues are released every day until the combination has been solved for the week.

Each contestant can make up to 10 guesses a day (resets at midnight) at the combination, and you won't lose a guess for doubling up (and that includes guesses already made by your crew).

To help people along their way a creative challenge is issued each week to take a photo/video fitting a description. Successful entries are rewarded with the answer to one of the 5 positions in the combination.

There's a list of the clues from current and past weeks here: http://community.vodafone.com.au/t5/The-Vault/TheVault-CLUES...

And a list of blog articles with the previous winners describing how they decoded the clues here: http://community.vodafone.com.au/t5/The-Vault/The-Vault-Week... 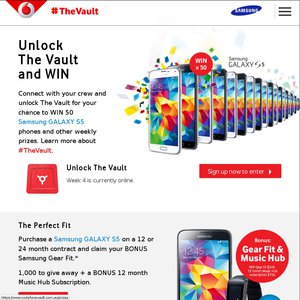