This was posted 5 years 3 months 28 days ago, and might be an out-dated deal. 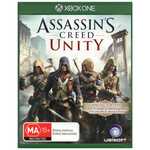 This is probably only a local store discount (Chullora, NSW), but you might be able to convince your local Big W store to match the price.

You can probably get it cheaper as a digital download but at least with this purchase you have a physical disc that can be traded or sold with your console when the time comes to sell.

There was about 5 copies of each game left on the shelf at the store.

Also, there were a few more Xbox One game titles on clearance, along with Xbox 360 and Playstation games.

Sorry, I should have taken a photo of the shelf while I was at the store but I'm only just growing my "Oz Bargain legs" and haven't plucked up the courage yet to do that.