This was posted 3 years 11 months 13 days ago, and might be an out-dated deal.

Big discounts on almost all of their great games on Android & iOS. Season pass is the best deal (around $4.79 AUD on average) for all games except Walking Dead Season 1, for which it's cheaper to buy the individual episodes (talkin' Android).

Worth noting that since they sell episodes as in-app purchases, you have to download each game before you can utilise these offers.

It’s the most wonderful time of the year, and we’re excited to share some outstanding deals on a variety of Telltale titles on mobile! From now until January 2nd, save huge on The Walking Dead, Tales from the Borderlands, BATMAN: The Telltale Series, and more on your Android of choice via the Google Play Store or on iOS via the App Store. 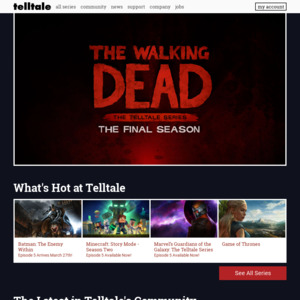