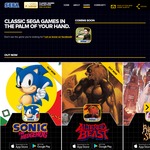 Sega Forever is the new promotion offered by Sega. They will be adding new retro games each month from platforms such as the Master System, Mega Drive, Dreamcast, and more.

These classic games now include additional features such as the ability to save your game, access leaderboards, bluetooth controller support and are fully playable offline (as one would hope).

To start off they have some classic Mega Drive games available for free. Sonic The Hedgehog
by Sega