This was posted 2 years 9 months 22 days ago, and might be an out-dated deal. 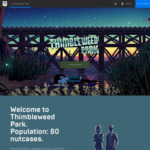 Great game, especially for Point N Click adventure game fans. It plays like a classic LucasArts game. Other games of this style you might have played before in "the good old days" or at least heard of are Maniac Mansion or ZakMcCracken or the Monkey Island series.
Don't miss it - you will love it.