This was posted 1 year 2 months 20 days ago, and might be an out-dated deal.

Rollova Organic Bamboo Sheets
Rollova sheets are some of the softest sheets you will ever sleep in!

We spend 30% of our lives in bed - so make sure that you spend that time sleeping in the best.

Our sheets are luxuriously smooth and silky, made from organic Bamboo Fabric, we think that you will never want anything else on your bed.

Breathable and super comfy
Thermal regulating - warm in winter and cool in summer
Naturally antibacterial properties
Hypoallergenic
Made from organic, renewable resources
Perfect for sensitive skin
Each set is made to the highest quality standards. A 375 thread count delivers the perfect balance between durability and comfort which means you will enjoy your Rollova Sheets for many years to come. 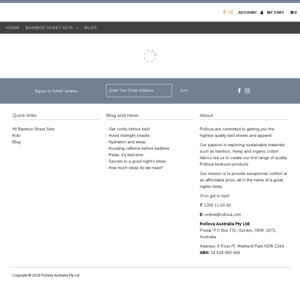