This was posted 1 year 10 months 8 days ago, and might be an out-dated deal. 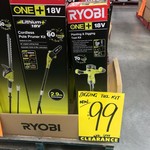 Each tool comes with 2aH battery

This is from the Bunnings Notting Hill store, items are kept near the trades/refunds desk

Last seen, plenty of stock for both the Ozito's and Ryobi's