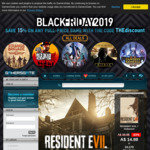 For both games, these prices are close to the all-time lowest prices.

Resident Evil 7 biohazard is the next major entry in the renowned Resident Evil series and sets a new course for the franchise as it leverages its roots and opens the door to a truly terrifying horror experience. A dramatic new shift for the series to first person view in a photorealistic style powered by Capcom’s new RE Engine, Resident Evil 7 delivers an unprecedented level of immersion that brings the thrilling horror up close and personal.

Set in modern day rural America and taking place after the dramatic events of Resident Evil® 6, players experience the terror directly from the first person perspective. Resident Evil 7 embodies the series’ signature gameplay elements of exploration and tense atmosphere that first coined “survival horror” some twenty years ago; meanwhile, a complete refresh of gameplay systems simultaneously propels the survival horror experience to the next level.

Virtual reality meets the zombie apocalypse! Arizona Sunshine is a first-person shooter built exclusively for VR that immerses you in a post-apocalyptic southwestern America overrun by zombies.

When you hear a flash of a human voice on the radio, your hopes surge - there are survivors out in the blistering heat of the post-apocalyptic Grand Canyon state! Armed with little more than your motion-controlled weapons and the scarce ammo and consumables you find along the way, you need to navigate the hordes of zombies coming for your brain in your desperate search for human contact.

Developed from the ground up for HTC Vive and Oculus, Arizona Sunshine puts you in the midst of a zombie apocalypse. Handle weapons with real-life movements, freely explore a post-apocalyptic world, and put your survival skills to the test in VR - putting the undead back to rest is more thrilling than ever before.