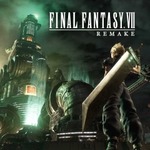 Released today and already has a five star rating!

If you're a PlayStation Plus member, you can download this item at no extra cost and it's yours to keep until your membership ends.

A theme for FINAL FANTASY VII REMAKE on PlayStation®4. Give your PlayStation®4 system’s home screen a personal touch with this special theme. Themes can be downloaded to give your on-screen display a completely new look, changing the background, icons and colours to match your favourite game or style.