This was posted 1 year 5 months 2 days ago, and might be an out-dated deal. 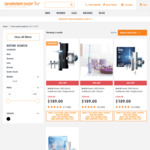 I ordered black based on other people's comments (in previous posts) regarding the handle turning yellow or looking mouldy.

Know you’re getting a superior clean* with the Oral-B Genius 9000 electric toothbrush. This highly advanced brush features a dentist-inspired round head that surrounds and cups each tooth with dynamic oscillating, rotating and pulsating movements is clincally proven to remove 100% more plaque.

Oral-B is the #1 Toothbrush brand used by dentists worldwide. Its round head cleans better* for healthier gums.