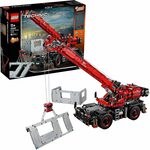 Not a historical low but still a good deal on a set that is getting hard to find anywhere let alone below RRP of $399.