Further to asking some questions in a post I posted back in June, I thought that I would provide a fresh update.

Yes I have succeeded in building an AMD based Ryzen 7 PC that runs both MacOS Catalina and Windows 10. My main purpose, was that the iMac was struggling, and MacOS is generally not as easy to use as Windows these days. Howver I like Final Cut, as well as Logic Pro. Both so far appear ro run flawlessly on the Mac side.
After doing some research, and watching some YT videos, I made the plunge, albeit with a few hiccups here and there. It looks like my 'MacOS' BT adapter is not fully compatible with MacOS, or it could be my Denon BT headphones (c/o Ozbargain ;-)).

Anyway, I have the best of both worlds now.

For anyone wanting any advice, let me know and I'll put you on to the what I have found/discovered that works best. '
The best site I have found so far (as well as Youtube) is https://amd-osx.com/, which has a good forum. I found some other sites like TonyMac ban you for a short time if you use/mention AMD. 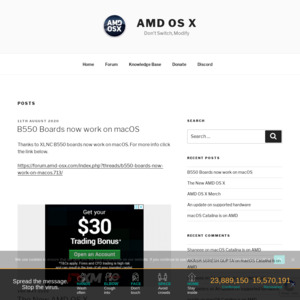