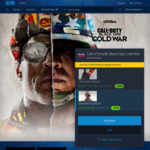 Probably trying to combat a certain game that released today….