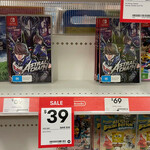 Was picking up Sonic Mania Plus and noticed this was on sale.

I heard It's a really good game and I don't think I have seen it this cheap before so picked up a copy myself too.

Amazon has it at $68 and doesn't appear to be on the Big W website.

I asked the staff and they said it was nation wide.

there were 8 copies at my Top Ryde store.

Sale ends on the 6th of Jan so get in quick !

link for the photo.