This was posted 11 months 15 days ago, and might be an out-dated deal. 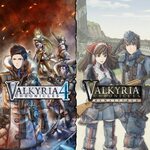 Great prices for this Valkyria Chronicles bundle - all time lowest price on the PlayStation Store.

In the world of Valkyria Chronicles, the continent of Europa has been plunged into the Second Europan War between The Empire and the Atlantic Federation over the precious resource Ragnite. Follow Lieutenant Welkin Gunther and the vaunted Squad 7 of the Gallian Militia as they take on the seemingly insurmountable forces of the Empire.

Valkyria Chronicles 4 takes place in the same timeframe as the original Valkyria Chronicles, but focuses on Squad E of the Federation. Commander Claude Wallace and his childhood friends set out to fight for freedom in this desperate war, but bone-chilling blizzards, waves of imperial soldiers, and the godlike powers of the Valkyria stand between them and victory.