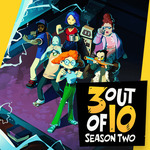 There PC version of this game will be free through Epic Games. Xbox and Switch versions of season one are around $15 so expect the same price for season two.

Season Two does bring with it one change, though, and that’s to the release schedule. Being modeled after a tv show in five episodes, 3 out of 10 hammered the format home by releasing at a rate of one a week. The new season, while keeping the episode format, drops all at once on April 8, perfect for a day of binge watching gaming.

3 out of 10: Season Two
by Terrible Posture Games