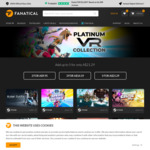 One of the rare build your own VR bundles is back on sale.

You can choose from the following games:

Choose carefully and make sure the games you pick are not cheaper to buy on their own from somewhere else - in other words, check the all time lowest prices for the games you are interested in.