We at Darkflow Software are thrilled to announce that Enlisted has completed closed beta testing via Xbox Game Preview program and is now available for everyone to play for free! Grab your rifles and machine guns, jump into your tanks and planes, put your helmets on and start fighting online on Xbox Series X|S!

Enlisted is a World War II online shooter with a different approach compared to other games you might have tried that share a similar setting. Historical authenticity is very important to us, which means we put a lot of effort into recreating all the gear and vehicles you can use, keeping their looks and battle roles as close to the originals as possible. This includes paying a lot of attention to even minor details of the equipment being used, as well as their historical availability. For one example, you won’t see a Tiger tank in our Battle of Moscow campaign, because at that time in 1941, it wasn’t in service with the German army yet. You’ll still have the chance to try more advanced gear in the Invasion of Normandy campaign that took place in 1944.

Note: Game is permanently free to play even when it is out of Open Beta. 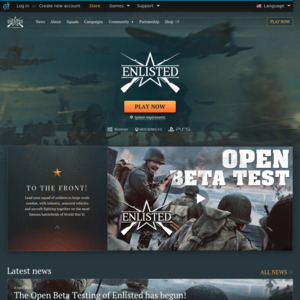