This was posted 1 year 3 months 27 days ago, and might be an out-dated deal. 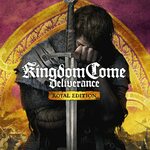 Great prices for these two highly rated and enjoyable games. Note that the SUPERHOT version on sale here is the VR version.
You will get plenty of playtime and value for your money out of Kingdom Come Deliverance (the base game was a freebie on Epic for PC, so if you have a gaming PC, check if you already have it so you do not waste money).

The Royal Edition contains award-winning open world RPG Kingdom Come: Deliverance and all released DLCs: Treasures of the Past, From the Ashes, The Amorous Adventures of Bold Sir Hans Capon, Band of Bastards and A Woman's Lot.

• Kingdom Come: Deliverance
You're Henry, the son of a blacksmith. Thrust into a raging civil war, you watch helplessly as invaders storm your village and slaughter your friends and family. Narrowly escaping the brutal attack, you grab your sword to fight back. Avenge the death of your parents and help repel the invading forces!

Blurring the lines between cautious strategy and unbridled mayhem, SUPERHOT VR is the definitive VR FPS in which time moves only when you move. No regenerating health bars. No conveniently placed ammo drops. It's just you, outnumbered and outgunned, grabbing the weapons of fallen enemies to shoot, slice, and maneuver through a hurricane of slow-motion bullets.

Decisive winner of dozens of VR Game of the Year awards, SUPERHOT VR is a title reimagined and redesigned from the ground up for VR and hand tracking controllers. The fruit of over three years of focused trailblazing, SUPERHOT VR brings the visceral action of SUPERHOT directly into your head and soul. And now also - directly into your PSVR.