This was posted 3 months 4 days ago, and might be an out-dated deal. 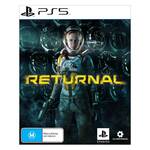 Returnal Trade in deal. Purchase two copies of Assassin's Creed IV: Black Flag on PS4 with the current buy one get one free promotion total $24.00. Then trade back towards the $49.00 pre order promotion for Returnal total $73.00