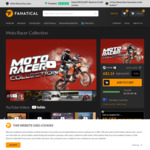 This is a pretty good deal as you get 4 motorbike racing games. True, they are not perfect but I am sure that for a little over a dollar you will get your money's worth out of those 4 games.

MOTO RACER / MOTO RACER 2: Retrace the series roots and tackle legendary races such as the famous Great Wall of China. Put your skills and reflexes to the test in Arcade and Simulation modes.

MOTO RACER 3: Feel the thrill of speeds 300 km/h and over on some of the world's greatest racetracks including Suzuka and the Sachsenring. Hop on a trial bike and negotiate the trickiest of obstacles. And take a nerveshredding high-speed trip through the streets of Paris.

EVERY MOTORCYCLE CATEGORY UNDER THE SUN, BROUGHT TOGETHER IN ONE GAME

MOTO GP: Hit speeds of over 300 km/h as you race flat out against the toughest of rivals.

SUPERCROSS: Go head-to-head with your rivals in all-terrain races and tease them with your fanciest tricks.

FREESTYLE: Pull off amazing Superman seat grabs, Indy backflips and can-cans as you fly through the air.