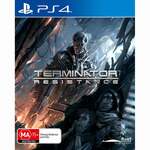 Cheapest I've seen it since released a year and a half ago. PS4 price only.