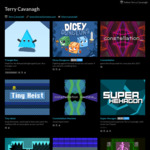 NOTE: purchasing these games on itch.io, will also include Steam keys for their respective listings over on Steam.

Become a giant walking dice and battle to the end of an ever-changing dungeon! Can you escape the cruel whims of Lady Luck?

In this new fast-paced deckbuilding roguelike from Terry Cavanagh (Super Hexagon, VVVVVV), Chipzel, and Marlowe Dobbe, you'll fight monsters, find better loot, and level up your heroes as you work together to take down the Goddess of Fortune, Lady Luck herself. Balance your carefully planned strategies against the unknown of a dice roll.

Play as six different characters, each with their own unique play styles and abilities.

Master each class and figure out which one best fits your style in this charming world filled with a growing array of twists and secrets.

Can you make it out alive? Maybe, but luck is definitely not on your side.

Super Hexagon is a minimal action game by Terry Cavanagh, with music by Chipzel.

Help! Everyone has been teleported away randomly! As the heroic Captain Viridian, it's up to you to find your friends, bring them back to safety, and save the universe!

VVVVVV is a platform game all about exploring one simple mechanical idea - what if you reversed gravity instead of jumping?

The game is designed not to artificially gate your progress. In VVVVVV there are no locks, no power-ups, no switches, nothing to stop you progressing except the challenges themselves.