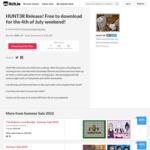 I came across 2 indie games on itch.io that are discounted 100%, their sales are ending fairly soon, on or before Wednesday July 6th 08:00AM AEST.

HUNT3R is the story of a thief and a cyborg. After five years of hunting and running across a terraformed Ganymede, Rhonda and Diarmuid must team up to return a stolen jade sphere to its resting place. Secrets long buried will come to light, both on Ganymede and within themselves.

Can Rhonda and Diarmuid learn to like each other and complete their quest?

Can they even learn to love each other?

Check out this new sci-fi otome RPG this 4th of July weekend!

The Legend of The Three Lights of Glaurung (English version and Spanish version) is on sale (100% off) until Wednesday July 6th 08:00AM AEST

This remake maintains most of the original sprites but adding colours and animations.

The game has the following features:

📜 Introduction and End of Game: comparing with the original game, this remake has an introduction about how Knight Redhan enters into the castle and an end when he escapes from the castle.

🔮🏰 Minimap: using an Oracle Crystal Ball you can see the map zooming in/out (moving to right/left).

🕯 Light Effects: player uses a candle to see in the darkness of the castle.

🎧 Stereo Sound: we recommend you use headphones to notice the source of sound effects.