This was posted 12 years 9 months 29 days ago, and might be an out-dated deal. 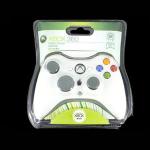 Hi Everyone I have been shopping on Focalprice.com for a while now and have had a 100% positive experience shopping with them and so i my self was looking for a cheap xbox 360 controller form them because Big W and Kmart are ripping us off with an $80 price tag but anyways i found one for $28.46 US which right now is just under $35 Aus which is incredibly cheap for these xbox controllers Focal price always has free shipping but if you want registered post is about $2.

P.S these controllers are 100% Genuine and are made on the same production line as the ones in kmart or EB,
MOD COMMENT - THIS IS NOT PROVEN - THERE IS SOME DISCUSSION ON THIS POINT. IF YOU ARE TO BUY THIS PRODUCT SUGGEST YOU READ THE COMMENTS AND DECIDE FOR YOURSELF.