This was posted 5 years 5 months 2 days ago, and might be an out-dated deal. 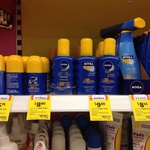 Shield up this summer!

Thousands of Aussies suffer from sunburns annually. Been waiting for weeks for them to go half price. Other brands such as Cancer Council ones are half price as well.