This was posted 6 years 5 months 11 days ago, and might be an out-dated deal. 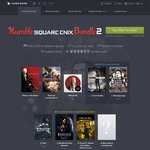 Pay What You Want

Pay More Than $15 US to Unlock

*all games redeem on Steam, Hitman GO is Android only.