This was posted 6 years 5 months 21 days ago, and might be an out-dated deal. 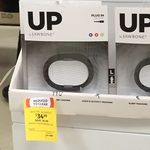 Just spotted the Jawbone UP (both sizes) on clearance at Coles Toombul. Also saw them on Thursday at Coles Carseldine so they are floating around Brisbane at least.

Jawbone UP
by Jawbone