This was posted 11 years 4 months 6 days ago, and might be an out-dated deal.

Hey there. It's my first time posting so if this has been covered before, I apologise. Full credit to 'linton' for introducing me to Game UK.

That works out to be around ~$38. The great thing about the Game of the Year edition is that it has one deleted campaign scene (involving Marcus, Dom and Dom's wife Maria) along with all 19 multiplayer maps in an addon (DLC) called 'All Fronts Collection'.

I think this is a great deal and I just bought it. Since it's PAL format, it'll definitely work on Australian Consoles but I'm not sure if you can use these for trade-in deals. I've ordered from Game UK before and I got my package in 6 days.

Please let me know if any of this is incorrect and I'll edit accordingly.

So to summarise for Gears of War 2 (including the 1600 MS Points DLC):

Game UK has Halo 3 ODST (Including a Limited Edition Wireless Controller) for only $67 (not including delivery).

This is a ridiculously good bargain considering that a normal 360 controller varies between 60-80 bucks whether you buy it from JB, Ebgames or even Game AU.

No matter how you look at it, you save anywhere between $80-100 bucks.

You get Halo 3 ODST, Beta Access for the upcoming Halo Reach and the limited edition controller all for just $86 bucks delivered. I think this is a great deal.

If anyone’s looking for PS3 stuff, Game UK has the DualShock 3 Controller for only ~$63 ( http://www.game.co.uk/Accessories/PlayStation-3/DualShock-3-... ). 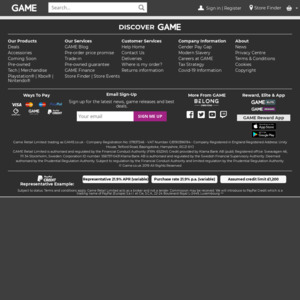