This was posted 4 years 5 months 14 days ago, and might be an out-dated deal. 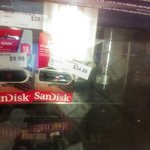 Was in Austpost to pay a parking ticket :) and saw this deal with USB Cruzer Glider Flash drives 32GB for $9.99 pretty cheap. I saw 2 in the store Austpost south melbourne Victoria. Should be same offer on other stores, not sure.

My Phone camera is bad so couldn't take a clear picture. Couldnt find online so posting a cam pic.