This was posted 4 years 8 months 5 days ago, and might be an out-dated deal. 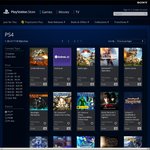 Playstation deals have just been updated. Below is the discounted price and the saving (ordered by the saving):

No page yet so you'll have to search for the titles. I'll update later once PSN have a deals page.