This was posted 3 years 1 month 8 days ago, and might be an out-dated deal. 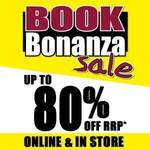 Lone wolf, knight errant, ex military cop, lover of women, scourge of the wicked and righter of wrongs, Jack Reacher is the most iconic hero for our age.

For a limited time, buy any 2 of the Jack Reacher paperbacks listed below, and get a 3rd title FREE!
It's the perfect time to complete your collection or delve into a whole new series!