This was posted 4 years 7 months 7 days ago, and might be an out-dated deal. 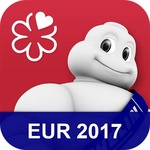 I would never fork out full price for something like this, but this price make it a bit easier to digest.

In case anyone's wondering, the Michelin guide rates food and drink establishments, not tyres. Though visiting too many of these places might make you look like a Michelin man!

Find and book the best restaurants from all the great places selected by MICHELIN guide inspectors alongside web users reviews from all over Europe. From small gourmet bistros to starred restaurants, there’s something to suit all tastes and budgets.

Search for a restaurant to suit your needs and criteria:
• Nearby (by activating your geolocation)
• by town, by address
• by MICHELIN rating (starred restaurants, Bib Gourmand, Michelin Plate)
• by price
• by cuisine type (gourmet, traditional, bistrot, Italian…)
• by restaurant name

Display your search results on a map or as a list.