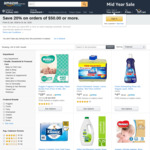 Another promotion from Amazon AU. Discount applied at checkout.

1663 select everyday essentials products in this promotion.. Feel free to explore
There are many products which are already discounted and also get further 20% off at checkout on the top of that
You can select filter to find the cheapest ones at the left side of page :

These terms and conditions apply to the offer (“Offer”) whereby customers who purchase $50 or more on selected household and personal care, baby and body care supplies will receive 20% off their order. Offer is valid until 11:59pm (AEST) on 30 June 2018. The Offer will only apply to items sold by Amazon AU on Amazon.com.au. Offers do not apply to purchases made from third-party sellers on Amazon.com.au even if “fulfilled by Amazon”.