This was posted 2 years 2 months 13 days ago, and might be an out-dated deal. 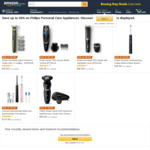 I believe this is the cheapest it's been for the Pro version.

Not the cheapest ever but a great kit.

I know other folks prefer Xiaomi, as they're significantly cheaper, but I had nothing but trouble and lag with mine. The hue system has been absolutely brilliant.