This was posted 1 year 4 months 11 days ago, and might be an out-dated deal. 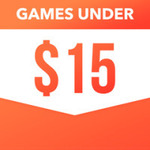 Apart from the title above, here are some other popular games under $15: